You are here: Home / Fires/Accidents/Disasters / Storm clean up and damage assessment underway across state 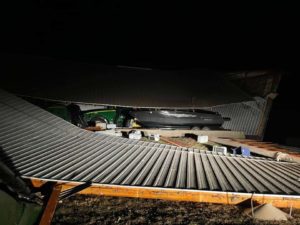 Iowa’s utilities will need a few days to get electricity restored to everyone after the powerful storm system that raked across the entire state last night, packing winds approaching 90 miles an hour.

Tina Hoffman, spokeswoman for MidAmerican Energy, says repair crews responded after the first outages were reported, braving the severe weather to get people back online.

“We had nearly 50,000 customers at the peak experiencing an outage,” Hoffman says. “Despite really challenging working conditions overnight, our crews were able to make great progress and we’ve been able to restore over 30,000 customers just in the overnight hours.”

At least five tornadoes are confirmed to have touched down in the state during the storm and as many as 150,000 customers statewide lost power. Hoffman says damage to MidAmerican’s power infrastructure will take time to repair — or replace.

Fort Dodge and the surrounding area have significant storm damage, according to Hoffman, and some residents there may not see the power restored until Saturday morning. Also, the Council Bluffs area was hard hit by the strong, straight-line winds.

“We’re estimating that we’ll be able to restore most customers in that area by midnight tonight but some could take as long as 6 PM on Saturday,” Hoffman says. “Those are going to be a long few days for those folks in that area. Lots of poles that we’ll need to replace and really get in there and make some major repairs in that area.”

As Iowans survey the damage, Hoffman makes two requests of customers.
“First and foremost, it’s very important to stay away from any downed lines you might see. Assume they’re energized. Don’t go near them and call us right away,” Hoffman says. “Second, if you have an outage, report it to us and we’ll get out there as quickly and as safely as we can.” As of 10 a.m. Alliant Energy is reporting more than 27,000 of its customers are still without power in Iowa and Wisconsin.

“Parts of roofs torn off and those type things, mainly on the south side of Kingsley,” Walhof says. “…Titan Machinery had the roof torn off and tossed across the road.” Walhof says there were reports the roofs of hog barns in rural areas around Kingsley were damaged as well.

Walhof says since the storm hit at about 5 p.m., it was difficult to assess damage in the dark. “The National Weather Service will be out to try to identify whether it was straight line winds or a tornado,” Walhof says. “We’ll see what the day brings in how quickly we can get Kingsley back up and restored and back on it again.”

The Plymouth County Sheriff restricted movement within the Kingsley City Limits overnight to residents of the community, to limit the number of sightseers driving through the damage. Kingsley-Pierson School was cancelled for today. In north-central Iowa,

Hamilton County Sheriff Doug Timmons is surveying the widespread damage this morning. “Utility poles, structure damage, a lot of tree damage,” Timmons says, “Yeah, just a lot of things throughout the county.” Even with all of the destruction, Timmons says he isn’t aware of any injuries in the county.

The clean-up process is underway in the Floyd County community of Rudd as an apparent tornado caused major damage on Wednesday night. Floyd County’s emergency management director Drew Mitchell says the storm went straight through the middle of town.

“It went from the south part of town up through the north. It heavily damaged some buildings, knocked down a lot of power lines and trees, stuff like that. It did damage to the water treatment plant. I know the city of Rudd will be without water and power for a few days,” according to Mitchell. Mitchell says despite the destruction there have not been any injuries reported. He says the town is already in a cleanup mode.

“The big thing is is cleanup to begin with, because there is a lot of debris, a lot of power lines down. The power lines will be taken care of by the fire department and the energy company. But cleanup is the big thing, there’s a lot of wood and stuff like that laying around town,” he says. Mitchell says people who want to volunteer as part of the cleanup effort are welcome to come to Rudd, but if you are not helping, they are asking that you stay away.

Anyone willing to help with the cleanup is asked to report to the Rudd Fire Department. The Rudd-Rockford-Marble Rock school building is open for those needing showers, warmth and meals. A team from the National Weather Service office in LaCrosse will be in Rudd today to survey the storm.

Cass County
Cass County Emergency Management Coordinator Mike Kennon says he has applied for a Disaster Proclamation from the State, and Governor Kim Reynolds is expected to issue a Proclamation for Cass and other counties, sometime today. Kennon says they’re just beginning to assess the damage that spans west/southwest of Atlantic to northeast of town.

“I’m pretty sure we are going to get some clarification that we indeed had a tornado. We had tornado sightings on the west side of Atlantic. You can see some damage to homes and farmsteads,” Kennon says. Kennon says they had a total of nine semi tractor-trailer rollovers in the county, primarily along Interstate 80. There were no life-threatening injuries reported. He says there is still a danger from the storm’s aftermath.

“We still have power lines that are in precarious places. We don’t want anybody to get electrocuted,” he says. “Report damage to me if you can so we can kind of get a handle on what happened.” He says power crews are out and about working on downed lines. The tornado sirens in Atlantic went off twice, Wednesday evening.

He offered advice to residents in the County, following the storms.
“Check on your neighbors — make sure everything is alright with folks — and report damage. Report utility pole damage and your utilities out, we would like to hear from you,” Kennon says.

Residents with damage or downed power lines should call the Cass County Emergency Management Agency at 712-254-1500.