You are here: Home / News / Storms bring Iowa at least 5 tornadoes, 1 death, damage in all 99 counties 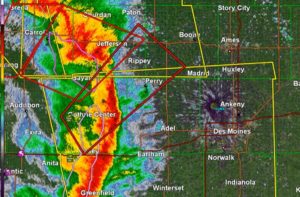 Last night’s powerful storm spun off multiple tornadoes in Iowa, while straight line winds exceeded 80 miles an hour. There are dozens of reports of structural and tree damage — and one person is reported killed in eastern Iowa due to the strong winds.

“Throughout the state of Iowa, we know we have at least five tornadoes, coordinating with the other NWS offices that also cover counties in Iowa,” Krull says. “Most of the offices today are going to be sending out damage survey teams to go look at the tornadoes we have confirmed, and then also assess if any of the other damage reports we got are associated with tornadoes or straight line winds.”

The storm packed exceptionally strong winds which reportedly topped out in western Iowa with identical reports from Missouri Valley and Sidney.

“I believe 83 miles per hour is what we got from one of our ASOS (Automated Surface Observing Systems) stations, which tend to be more reliable,” Krull says. “There was a personal weather station report of 88 miles per hour out in Audubon but the reliability of those personal weather stations isn’t always the best, but it’s definitely possible that a thunderstorm could’ve produced an 88 mile an hour wind gust in west-central Iowa.”

One death is reported in eastern Iowa that’s attributed directly to the storm. The Iowa State Patrol says strong winds flipped a tractor-trailer into a ditch in Benton County, killing the driver. The name is being withheld. Krull says it appears that’s the only casualty.

More than 140,000 homes were without power statewide at the peak of the storm. Utilities say it may be three days before all of the power is restored.