You are here: Home / News / Terrace Hill the main character in a children’s story premiering Sunday 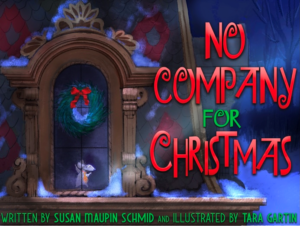 A children’s story about the governor’s mansion in Des Moines will be featured at this Sunday’s “Christmas at Terrace Hill” event.

“I was asked to write a Christmas story about the house,” Susan Maupin Schmid, a tour guide at the mansion, told Radio Iowa, “so I suggested that we turn the house into a character.

Maupin Schmid, by the way, is also a children’s book author.

“I took Terrace Hill and made her the grand old lady of the prairie who loves celebrations and parties and Christmas, but this year she’s all alone. The family’s gone, the house is dark and quiet,” Maupin Schmid said. “To me, the story is about the experience that children in Iowa have been through the last couple of years…The message of the story — without spoiling the plot — is that you’re not forgotten.”

The governor will read the story once Sunday afternoon, at the Carriage House on the property. Animated illustrations created by Ames artist Tara Gartin to go along with the story will be projected on a screen.

“That’s really, I think, one of the things that makes this event special and exciting because it’s going to be a one of a kind media presentation,” Maupin Schmid said. “There’ll be the story, but there’ll also be this beautiful artwork. I think kids will really enjoy this.”

Maupin Schmid hopes to get the story and illustrations released in book form later. Her first children’s book was published in 2008 and in 2016 she released a trilogy.

“I write fantasy,” Maupin Schmid told Radio Iowa, “and so the books that are currently on the market from Random House are ‘If the Magic Fits’, ‘Ghost of a Chance’ and ‘The Starlight Slippers’ and they’re about a little girl named Darling Dimple who works in the under cellar of the castle.”

It seems natural, then, that she wound up giving tours at Terrace Hill, but someone else prodded her to apply.

“My daughter and I were touring the home and I had just such a good time talking to the docent who was taking us on the tour and I said: ‘How come I don’t ever meet people who are interested in these things?” And my daughter said: ‘Well, maybe you need to go some place where those people are at!'” Maupin Schmid said. “And it was one of those, like, no-brainer moments.”

More than 300 tickets have been sold for Sunday’s event, which starts at 1 p.m. and ends at 4 p.m. Guests will be able to tour the home’s first and second floors, which have been decorated for the holiday. Maupin Schmid, in tour guide mode, said those with keen eyes will notice important details.

“You walk inside and here is a 200 pound walnut door, one of 8000 pounds of doors on that main level — just on the one level of the house, and that door has been hanging on those big hinges for 150 years,” Maupin Schmid said. “And I like to swing that door a little bit for people and ask them what they hear and they always say: ‘I don’t hear anything.’ That’s because of the craftsmanship that went into building that house, which is why it’s still standing.”

She also credits those who’ve maintained the home over the years. “It’s one of the premiere houses in the nation from the time period that’s still standing,” Maupin Schmid said, “that’s in that kind of condition.”

Online ticket sales for the event end at midnight Saturday. Tickets must be purchased in advance and are $25 each and $50 for a household. The money goes to a fund for upkeep and improvements at the mansion. A “Christmas at Terrace Hill” event was held in 2019, but nothing was planned for last December due to the pandemic. The event coordinator for Terrace Hill says guests this Sunday are welcome to wear face coverings if they wish, but it won’t be required.