You are here: Home / Fires/Accidents/Disasters / Wednesday’s storm is derecho part two for Iowa 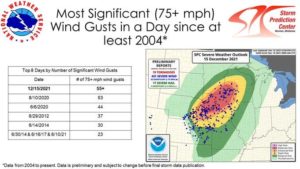 The storm that roared across Iowa Wednesday has been categorized as a derecho.

National Weather Service meteorologist Brooke Hagenhoff says it’s not exactly the same as the 2020 version. “Technically it would be a serial derecho — which is different than what we saw last year with the August 10th derecho — which is more of what we would call a progressive derecho,” she says. “Kind of the main difference is kind of how it formed.”

She says the derecho this week had winds in the upper 80s — but was more spread out across the state. “The derecho that we had last summer in August really had kind of that narrow area that had that very strong 100, 100 plus, 120s even as you got out toward Cedar Rapids. So, that’s kind of the main difference between the two — is that really narrow and very intense band last year — compared to this one which was widespread high-end winds,” according to Hagenhoff.

There were several tornadoes with Wednesday’s storm — and Hagenhoff says the 2020 version also had them. “The one that occurred last August actually did have tornadoes towards the end of the duration of it in the Illinois area. So most of the tornados did not occur in the state of Iowa — they were later on in its lifetime. But, that is something we tend to see in derechos,” she says.

She says you usually don’t see something like this in December. “This is an extremely rare event — especially for Iowa to have an event of this scale in December,” Hagenhoff says. “We certainly set records as far as temperatures and those temperatures were certainly part of the fuel for the thunderstorms that we had through the evening hours. So, we’re in rare territory with a system like this for sure. The Storm Prediction Center before the event had issued a moderate risk for Iowa — which is a level four out of five. And that was the first time in their history that Iowa had been at a moderate risk.”

The governor had issued disaster declarations for 49 of Iowa’s 99 counties by Thursday evening for damage done by the Wednesday storm.