You are here: Home / News / Construction to begin soon on new bike trail in NW Iowa 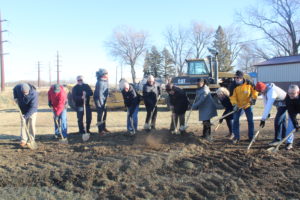 Members of the PlyWood Trail Foundation held a ground breaking in Merrill on Tuesday afternoon for the start of the recreational trail that will ultimately connect Le Mars to Sioux City, as well as Merrill and Hinton.

Ryan Meyer, chairman of foundation, says the project has been years in the making and now the actual construction on the trail will begin within the next few days.

Mike Wells, of Wells Enterprises, is a cycling enthusiast, having competed in triathons, and he’s donated several thousand dollars to the project. Wells says the trail will add quality to life and it, along with other proposed bicycle trails in and around Sioux City, will help the region to grow and become a destination.

According to a news release issued by the PlyWood Trail Foundation, $4 million dollars has been raised to support the recreational trail effort from a variety of both public and private sources. Every dollar the foundation is able to raise has the ability to be matched by both state and federal funds.

Although a final version of the trail has yet to be approved by the Iowa Department of Transportation, organizers hope to connect to Sioux City by 2023.