You are here: Home / Fires/Accidents/Disasters / December 25th is the worst day of the year for fires started by candles 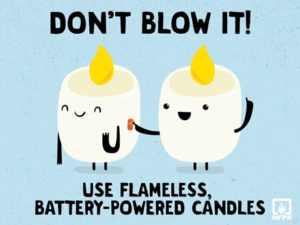 While some Iowans’ homes will be visited by a sleigh and eight tiny reindeer tonight, it’s hoped there’s not a visit tomorrow from a fire truck.

Andrea Vaspis, public education director for the National Fire Protection Association, says if you’re trying to add some holiday ambience to the room by lighting a few candles, do so with caution.

Vaspis says, “Candles, on average, cause 21 homes fires a day in the United States with the peak days of candle fires being Christmas Day — at almost three times the rest of the year — and New Year’s Eve and New Year’s Day.”

December is the peak time of year for candle fires and studies find almost three of every five December home fires are started by candles.

“Candles are great but they are an open flame and when they’re placed too close to a mattress, bedding, cartons, decorations,” Vaspis says. “People leave the room and think they’ll be gone for 30 seconds but they’ve actually left for a lot longer, and now this candle is left unattended.”

Christmas Day is also one of the top three days of the year for home cooking fires, but she says lighting candles may only increase the risk of a disaster.

“The key here is, if you’re going to use a candle, make sure it’s on a sturdy base. Make sure it’s at least 12 inches — one foot away — from anything that can burn,” Vaspis says. “We are big supporters of battery-operated candles because you can use them anywhere and not worry about putting them with your decorations.”