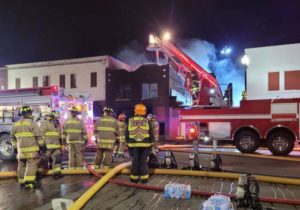 Fire destroyed a popular restaurant in Hawarden this weekend.

“When we arrived on scene there were visible flames, and things coming out the front side, street side of the fire,” he says. Shiefen isn’t certain as of yet as to what may have started the fire. He says fire officials are still conducting their investigation.

Shiefen says nearby structures did receive some smoke damage, but there were no other buildings that had caught on fire. Owner Chad McVay posted on social media that “Our family business is gone. Central Café is a loss.”

Shiefen says firefighters were on the scene of the fire for nine hours. He says he is thankful for the community’s support of providing refreshments and other services while firefighters continued to battle the fire. He says they had around 112 firemen who fought the fire and they appreciated all the support.

Shiefen says Central Catering, a popular catering service for northwest Iowa, and based at Hawarden, is a separate business and is located in a different building and was not affected by the fire that destroyed Central Café.