You are here: Home / Human Interest / Comedic book about orthodontics is filled with biting humor 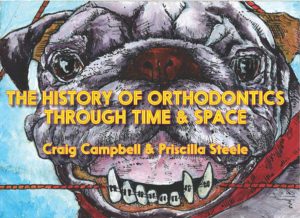 A married couple from Marion has created an illustrated book that’s a unique and humorous look at the branch of dentistry which is focused on the straightening of teeth.

Priscilla Steele and Craig Campbell are the co-authors of “A History of Orthodontics Through Time and Space.” Steele says the idea for the book was sparked by an art project they were hired to produce for a local dentist.

“It’s kind of outrageous and irrepressible,” Steele says. “Many historic sites are pictured in its pages, the Statue of Liberty, the Sphinx, George Washington plays a prominent role, and it was great fun!”

The audience for the book is as wide as the Cheshire Cat’s smile, and she says anyone who revels in whimsy and the absurd will gobble it up. 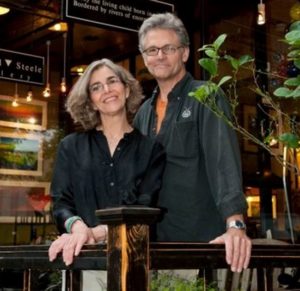 “Although it would resonate very much with anybody who has ever been subjected to braces,” Steele says. “I should qualify that a little bit because it’s such a painless undertaking these days with various technological innovations.”

The stories carry the reader from ancient Egypt to outer space and all points between, while the colorful illustrations include the classic portrait of the aforementioned first American president flanked by colonial soldiers who are pulling on his teeth with cables.

“Craig did all the writing and I respond to the tenor of his writing with the quality of the images that I create,” she says. One reviewer calls the 64-page book “a surreal way to look at the world…a joyful mixture of fact and fiction.”

It’s available through multiple sites including Amazon, Barnes and Noble and the publisher, Ice Cube Press, based in North Liberty.