You are here: Home / Weather / Weather experts will long be studying our destructive December derecho 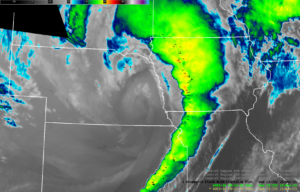 Weather observers are still trying to get a perspective on the intense storm system that blasted across Iowa earlier this month, the second derecho to hit us in as many years — which spun off a record number of tornadoes.

State climatologist Justin Glisan says the storm was historic in many ways, like how the “moderate area risk” was issued for Iowa. “Moderate” may sound tame but that’s a Level Four warning out of five.

“This was the first ‘moderate area’ put out by the Storm Prediction Center in Iowa, Minnesota and Wisconsin during the month of December in history,” Glisan says. “This tells you how unstable the environment was. We had wind shear available, we had instability available, we had ample low level moisture, and all of the ingredients came together for a large-scale straight line wind and tornadic event.” 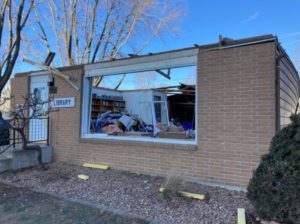 About half of the state was declared a disaster by the governor, and Glisan says damage was widespread from the multitude of tornadoes, the severe thunderstorms and the straight line winds, some of which had gusts that reached 80 to 90 miles an hour.

“We’d also had multiple reports of 70 mile-per-hour winds based on non-thunderstorm winds,” he says. “These are winds that are produced by the tight pressure gradient that the low pressure system was able to produce, given its proximity to a blocking high pressure system that was able to amp up our temperatures during the day, overnight on the 14th and into the 15th.”

Iowa cities from Sioux City all the way to Burlington reported record high temperatures during the day, most of them springlike upper 60s and lower 70s — unheard of for mid-December. Those temps quickly fell when the storm hit, dropping 30 to 40 degrees, helping to fuel the violent weather. 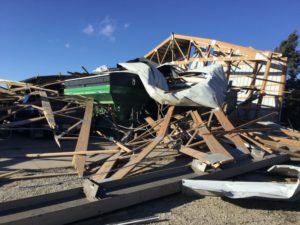 A total of 43 tornadoes were reported in Iowa during this storm, and one death was attributed to the winds — a truck driver whose big rig was flipped into a Benton County ditch. Those 43 twisters set a single-day record for Iowa. At least seven tornadoes were also reported in Nebraska during the storm, and there was an exceptionally rare twister to our north.

“We had the first tornado in Minnesota history in December,” Glisan says. “Given the large-scale nature of this outbreak, while one fatality is too much, it is good news that we were able to get the proper warnings up.”

More than 150,000 Iowa homes lost power during the storm and it took several days to get them all back online. Like the first derecho that hit Iowa back on August 10th of 2020, Glisan says they’ll long be studying this second derecho from December 15th of 2021.