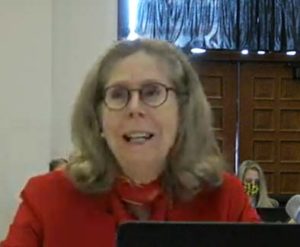 Iowa State University officials have been investigating a public-private partnership for the operation of its campus utility system.

It would be similar to the University of Iowa’s 50-year deal that yielded more than a billion dollars for the university. ISU president Wendy Wintersteen says after the first of the year, more information will be released about ISU’s investigation of a similar deal for the Ames campus, but Wintersteen notes ISU’s utility system is not as large as the one in Iowa City.

“We have a number of other public-private partnerships that are in place or are being discussed,” Wintersteen says. “The most recent one is our very good partnership with Alliant Energy to establish a solar farm near our farms on the south side of the Iowa State property. That is a great opportunity for us because it will tremendously reduce the cost of our utilities at the dairy farm and some of our other facilities down there and it gives an opportunity for research.”

Rod Lehnertz, a senior vice president at the University of Iowa, says the 50-year lease for the utility system on the Iowa City campus yields about $15 million a year for the University of Iowa. It’s being used for some utility improvements and to test programs that aim to keep students on track to graduate.

“They’re very important morale-boosting efforts on our campus,” he says.

University of Iowa president Barbara Wilson says one of the pilot projects is called “Next Gen Hawks” program.

“They’re coming from backgrounds where nobody in their family has gone to college and they are the first ones and we introduced a new orientation program to get them to campus earlier and we’re wrapping supports around them for their first year,” Wilson says. “And with that pilot program we’ve been able to take our first year retention for that group of 70 students from about 88% to 92%.”

A member of the board that governs the University of Iowa says they’ve investigated a public-private partnership for operating a parking facility in Iowa City, but “the risk appears to be greater than the reward.”