You are here: Home / News / Manchester mayor retires as longest-serving in the state 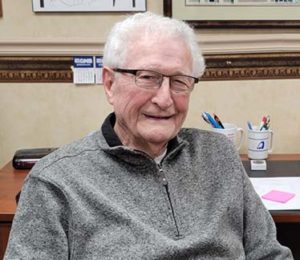 The city of Manchester will enter the new year with a new leader for the first time in nearly five decades.

Manchester Mayor Milt Kramer is retiring from the job he started on September 16th, 1974. The Decorah native says government was never originally in his plans when he first came to Manchester in the 1960s as a teacher and basketball coach. He gained some notoriety as a coach and then was approached about running.

“A number of businesspeople came to me and said ‘Milt why don’t you run for city council’ and I said I’m a basketball coach and they said you are not going to do that forever,” he says. “I didn’t, but I did for a year trying to balance coaching and city government. Found out that that just didn’t work and I had to give one of them up — not thinking that I gave up the better paying of the two.”

Mayor Milt says he has many things to be proud of in the last 47 years — including the development of the industrial park and businesses in the community. Many of his former students now run businesses in the town. His tenure in Manchester is record-setting.

“I’m the longest-serving mayor in Iowa — people have checked on me nationwide and I’ve been told and don’t know if there is proof of this or not — some guy in upper New York has me by a couple of months — otherwise, I’m number two in the United States,” he says.

Mayor Milt announced his retirement in July and conducted his last city council meeting this week. City council members and City staff presented him with tokens of appreciation, including a special plaque and his typewriter.

Longtime city council member Dean Sherman says Mayor Milt is leaving a legacy of service after encouraging so many people to get involved in the city. “It’s hard to put words behind the impact he’s had on literally hundreds of people in our community. Where they not only learned leadership for the city — but took it home into their own lives and their own businesses,” Sherman says.

The city council also presented Milt with a new lawn chair that says “Mayor Milt” on the back. Mayor Milt gave his homemade wooden gavel to incoming mayor Connie Behnken — and says she will do a great job and the city will continue moving forward.