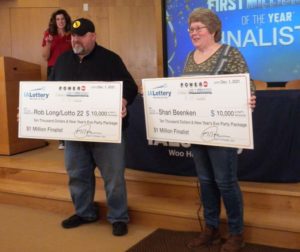 Two Iowans will have more interest than normal in watching the ball drop on the New Year in New York.

They are among five finalists in the one million dollar New Year’s Powerball prize drawing. Iowa Lottery spokesperson Mary Neubauer says it’s the first time any state has had more than one finalist.

“With two finalists in the running — Iowa has a 40% chance that we would have the million-dollar winner that night., It’s live on the air and we at the Iowa Lottery will find out at the same time as everyone else whether or not we have the winner here in Iowa,” Neubauer says.

This is the third year for the special drawing. “For the last two years given the COVID realities, the winners have not gone to New York, they’ve had a house party at home. So they’ve had dinner that night and champaign and things at home — and so that is what our winners will be doing,” according to Neubauer.

One finalist is solo. “We have Shari Beenken from Titonka, a tiny little 500 population community up in northern Iowa. She entered tickets on her own — so if she wins the full million dollars goes to Shari,” she says.

Rob Long of Waterloo is the other finalist — and will share the prize. He entered tickets on behalf of the group and Neubauer says before taxes each member of the group would get $45,500 dollars.

The drawing in New York is in the eastern time zone, so the Iowans will learn if they have won at 11:15 Iowa time on New Year’s Eve. Neubauer says they are already anxious.

“I’m sure they’ll just be watching the clock tick by that night, and then finally the time will come,” Neubauer says. The special Powerball drawing is held during A-B-C’s broadcast of “Dick Clark’s Rockin’ Eve” in Times Square. If an Iowan wins they have to wait until Monday to collect their prize at Iowa Lottery Headquarters.