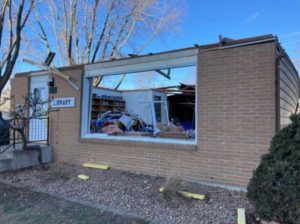 The outbreak of dozens of tornadoes in Iowa and across the region last month was very unusual and one weather expert says it may be a sign of what lies ahead.

Doug Kluck, climate services director for the Central Region of the National Weather Service, says massive and rare derecho storms like the one on December 15th may be connected to a changing climate.

“The likelihood of tornadoes in December and January and other, if you will, off-season severe weather is and will be enhanced in the future,” Kluck says. The regional National Weather Service office in Kansas City is seeing other changes to the traditional storm track.

Kluck says, “The center of tornado alley moving further east, out of the Great Plains and such and then, of course, simply the observation of severe weather in other parts of the year can lead one to that conclusion, to some degree.”

Parts of Iowa saw record high temperatures in the 70s prior to the storm’s arrival on December 15th and the warm air collided with a cold front, bringing exceptionally strong straight-line winds and multiple damaging tornadoes. Minnesota recorded its first-ever December tornadoes that same day.

“Those conditions are very hard to put together in December and January, certainly in Minnesota but even in Iowa and Nebraska,” Kluck says. “The further south you go, the easier it is to put the combination of those variables together to create severe weather, but certainly not this far north.”

The derecho was Iowa’s second in two years and it spun off 43 tornadoes in the state, a single-day record, along with 18 twisters in Nebraska and six in Minnesota.