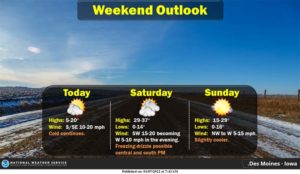 There’s some relief coming from the cold weather as wind chill advisories have expired.

National Weather Service Meteorologist, Mike Fowle, says the cold winds are moving out. “The coldest air of the season that impacted us is gradually going move off to the east — and we are expecting a little milder temperatures for this upcoming weekend,” he says.

Fowle says temperatures are going to continue to vary. “I guess I would categorize it more as a roller coaster. We are going to warm up a little bit tomorrow (Saturday) to near seasonal normals or seasonal averages with temperatures in the 20s and 30s. And then we will tumble a little bit late into next week. Not as cold as we were — but back below seasonal averages — with highs falling back to the single digits up into the teens,” Fowle says.

The recent run of single-digit temperatures with subzero windchills seemed a lot worse after a December that saw some days in the 60s and 70s — but Fowle says the cold was normal.

“We haven’t really approached any record-type low temperatures. So although it’s been cold we weren’t seeing any sort of record cold. This is more typically January in Iowa kind of conditions,” he says.

Fowle says we aren’t likely to see much new snow in the coming days. “Right now we are not seeing any real large weather systems on the horizon — at least for the next week to ten days,” according to Fowle. “There is a change for some weaker systems to move across the state — including even tomorrow. We are watching the potential for a little bit of freezing drizzle possibly developing — and as we know — sometimes these real minor events can cause headaches on the roadways.”

Fowle says the best thing to do is to keep an eye on the updated forecast when you head out and be prepared for any type of winter conditions.