You are here: Home / Outdoors / Ice conditions improving, but not all ice is ready for fishing 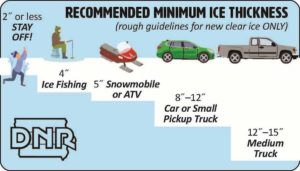 Temperatures have been colder recently, but  Joe Larscheid, chief of the Iowa DNR Fisheries Bureau, says given the unusually warm December we had, Iowans who love ice fishing are having to be patient — or head north.

“We really don’t have safe ice conditions yet in southern Iowa, even though we’ve got some cold weather right now,” Larscheid says. “In northern Iowa, they’ve been ice fishing for quite a few weeks now safely in the more northern lakes.”

Especially when it’s this early in the season, ice anglers need to make sure safety is their top priority, and there are a few simple rules to follow.  “Go out with a person that you know and trust, and drill a lot of holes as you venture out onto the ice and verify that it’s at least four to six inches thick of clear, hard ice,” Larscheid says. “I, personally, won’t go out until it’s six inches, but four inches of clear, hard ice is considered safe.”

He’s quick to add, no ice is 100-percent safe, while new ice is usually stronger than old ice. Larscheid says ice anglers should never go out alone, and always let someone know where you’re going and when you’ll return.

“It’s good to have a ‘throwable,’ an inflatable thing so if you do fall through, you won’t sink,” he says, “and a rope that a buddy can toss you in case something happens.” He also suggests wearing a life jacket, bringing a whistle to call for help, and an extra set of clothes, including gloves. The DNR offers a weekly fishing report that’s online at: www.iowadnr.gov.
(By Pat Powers, KQWC, Webster City)