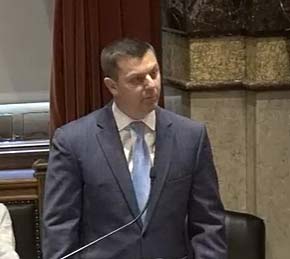 GOP leaders in the Iowa legislature are promising tax cuts, welfare reform and new state support for parents who enroll their kids in private schools.

Democrats say their focus is on addressing Iowa’s workforce shortage.

“In a post-pandemic economy, the competition is fierce for jobs and citizens,” Whitver said in a speech on the Senate floor. “If policymakers want to make this state grow, we must be on the list of states with the lowest income tax in America.”

House Speaker Pat Grassley of New Hartford isn’t signaling how low the House GOP might like to cut income tax rates — only that the state’s surplus must be returned to taxpayers.

“This is something every Iowan can understand,” Grassley said in a speech on the House floor. “The state is taking in more tax money that it needs and Iowans deserve to have that money back.”

Senate President Jake Chapman, a Republican from Adel, said legislators should take a stand against books in schools that he says describe sexually deviant behavior. “When students are subjected to this violating content, we need to ensure parents have the ability to protect their children by removing them from that district,” Chapman said. “We can and must tear down the financial barriers that prevent parents from making that decision.”

“As Republican leaders gladly tell us, they have been in full control of our state government since 2017 and Republicans are now promising us more of the same that hasn’t worked to solve our workforce issues,” Wahls said. “…We’ve been told there will be more of the greatest hits this session: more attacks on LGBTQ Iowans, more gasoline on te culture war fire.”

“We see Iowa companies continuing to have ‘Help Wanted’ signs in their windows and they are pleading with us to do all we can to help them find workers,” Konfrst said. “Certainly, workforce challenges are happening all across the country, which is why it’s so important that we work holistically to address this crisis in Iowa.”

Konfrst said in addition to making child care not only available, but affordable, there need to be more housing options in Iowa’s small towns, rural areas and cities.

House Majority Leader Matt Windschitl, a Republican from Missouri Valley, said there are many opportunities for Republicans and Democrats to work together in 2022.

“Let us try and focus on those opportunities to build the bridges instead of burn ’em,” Windschitl said this morning. “I know it’s easy to do when we get on Facebook and Twitter and try to burn down the opposition, but let us find those times when we can actually move forward together and get done what Iowans expect us to do.”

Governor Reynolds will reveal details of her legislative priorities tomorrow night. The governor’s annual “Condition of the State” address is scheduled to start at 6 p.m.

“Iowans are neither timid nor hesitant,” Reynolds said. “They’re bold, decisive…and that’s what they expect from those that they elect.”

Chapman, the Republican from Adel who’s Senate President, called for “complete elimination” of the state income tax, but other GOP legislators who addressed the crowd did not talk specifics. House Speaker Pat Grassley of New Hartford said the GOP had a lot to be happy about.

“Can you imagine being at a Democratic event like this?” Grassley said at the fundraiser. “…Everyone would be so angry and terrified of the world around them and you come here to this event and look at this. We’re having a great time. We’re celebrating the success that we’re accomplished in this state and what we’re going to accomplish moving forward.”

Grassley noted two recent special elections in the Ankeny and Newton areas this fall had been won by the Republican candidates. The newest member of the legislature, Republican Senator Dave Rowley of Spirit Lake, won a special election in December and was sworn into office this morning.