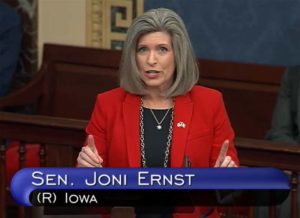 Iowa Senator Joni Ernst spoke out against the Democrat-led effort to pass the so-called voting rights bill by ending the Senate filibuster.

Ernst, a Republican from Red Oak, says it was Democrat Speaker Nancy Pelosi who tried to steal an election in Iowa by considering overturning the election of Congresswoman Marianette Miller-Meeks.

“In a blatant political power grab — the speaker of the House spent over $600,000 of taxpayer money in an attempt to unseat the duly elected Congresswoman Miller-Meeks,” Ernst says.

Ernst says the president and other Democrats are not telling the truth. “Plain and simple, Washington Democrats are gaslighting the American people,” according to Ernst. “There is not a voting crisis in this country — it is manufactured. Their push to blow up the Senate and take over elections isn’t about voter access, it’s about power.”

Representative Miller-Meeks sat behind Ernst as she spoke on the Senate floor.