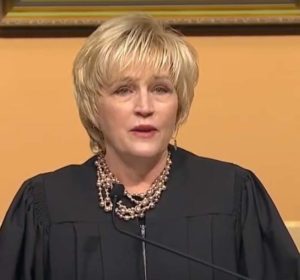 Christensen delivered the annual “Condition of the Judiciary” speech this morning in the Iowa House. She did not make a budget pitch, but instead focused on court operations and promised a review of the juvenile court system will be completed in November.

“As chief, I look forward to providing Iowans with a sense of peace that we’ve got this,” Christensen said to conclude her speech. “The Judicial Branch will continue to block out all the noise brought on by the pandemic and we will continue to stay laser focused on our steadfast commitment to ensure each and every Iowan has meaningful access to justice.”

Christensen wore a face covering in the House until she was recognized to speak and put it back when she finished and left the room. Christensen told lawmakers Covid had “an abrupt and brutal impact” on the judiciary.

“Not only did everyone in the Judicial Branch get really good at handling the daily challenges that at one time almost threw us under the bus, but we got stronger and we got better,” Christensen said. “…Each and every one of our Judicial Branch members has been a profile of what it takes to work effectively in a crisis.” 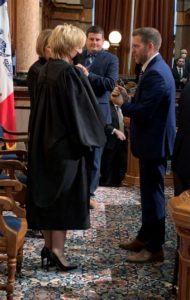 According to Christensen, “the Covid storm continues to rage.” The chief justice issued 30 orders since the beginning of the pandemic, but replaced those with one order in December that keeps some changes in place.

“This omnibus order recognizes the court system is 100% fully operational, but we are continuing some practices adopted on an emergency baiss when the pandemic first started,” she said. “These practices not only keep court proceedings moving along, to participate in a meaningful way without jeopardizing health or conflicting with their work schedules.”

Christensen said some of the changes might never have been envisioned if the courts hadn’t been forced to innovate during the pandemic.

Republican Representative Gary Worthan of Storm Lake is chairman of the subcommittee that drafts the court system’s budget. Worthan said there are a lot of good things happening in the courts.

“There are a couple of things they’re asking for that are kind of out there in terms of the reality of the budget,” Worthan told Radio Iowa this morning, “but my goal going in is that we maintain what we did last year, you know, we cover their salary adjustments.”

At least 90% of the court system’s budget is for salaries and Worthan said it’s a House GOP priority to maintain staffing levels and courtroom hours, especially in the courthouses in each of Iowa’s 99 counties.

“It took us a while to get there,” he said, ‘but when you start looking at 18 months to get into court on a domestic dispute or a contested divorce, that’s not sitting well with our people.”

Worthan said he believes it’s important to add another four district court judges to handle the volume of cases in the system.

(This story was updated to correct the amount of money requested.)