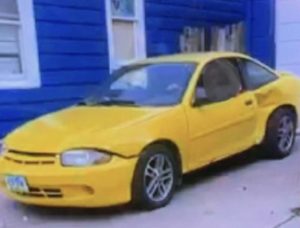 Vehicle believed to be involved in hit and run. (DMPD photo).

Des Moines police say they’ve found the vehicle they believe was involved in a deadly hit-and-run early this morning.

Des Moines police and fire crews were called to a main eastside road before 3 a.m. to investigate a report of a pedestrian being hit by a vehicle.

They found a man with serious injuries — and he died a short time later at the hospital.

Investigators say evidence shows the man had been hit by a car — which they identified as a yellow 2004 Chevrolet Cavalier. Police say its front license plate was at the scene. There’s no word yet on an arrest or the name of the victim.