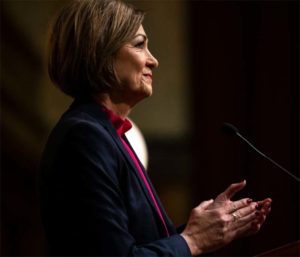 Gov. Reynolds during the Condition of the State speech. (pool photo)

Reynolds made it clear zero percent isn’t something she’s proposing this year. She’s set 4% as the goal to reach by tax year 2026.

“If it drives revenue like we believe that it will, then we’ll be able to maybe look at it again in the next several years and see if we can even go further,” Reynolds said, “but this is a big jump from where we were in 2018.”

Five years ago, Reynolds signed a bill that was, at the time, the largest tax cut in state history. It reduced the top income tax rate to 6.5% and got rid of a deduction that made Iowa’s top income tax rate appear higher than it actually was when compared to other states. The plan Reynolds has released this week retains current deductions, like the one for charitable donations, and tax credits.

“So what we are going to do, though, is at some point take a look at our tax credits and really put some metrics in place, we can start to understand maybe the value and as we continue to lower the income tax rates that’s something we’re going to have to take a look at before we go completely to zero,” Reynolds told Radio Iowa, “because if you look at other states that have zero individual income taxes there are other mechanisms that they’re getting their revenue from.”

Ten other states have a so-called flat tax, including Illinois and Michigan.

“When I took office we had the sixth highest income tax rate in the country and if we get the done or when I get this done, we’ll be the fifth lowest,” Reynolds said. “That is significant.”

Iowa does not tax Social Security benefits, but another component of the Republican governor’s tax plan calls for no longer charging the state income tax on other types of retirement income. Reynolds said Iowa loses many retirees to other states that don’t tax pensions.

“They could be volunteers, the money that they would generate in our economy that we’re losing,” Reynolds said. “I mean, they’re even jumping over to Nebraska, so give me a break. It’s not any sunnier or warmer over in Nebraska, but we’re losing them, so I’m really, really excited about the impact that could have.”

Farmers would get a tax break, too, in the Reynolds tax plan. Reynolds said it’s written in such a way so that out-of-state investors who own farmland couldn’t be able to claim it. Iowa residents who’ve retired after being actively engaged in farming for at least 10 years would be able to receive cash rent on their land without paying taxes on that income.

“We didn’t want somebody coming in, buying a bunch of land and then claiming an exemption,” Reynolds said.

Reynolds has for weeks promised she’d reveal her tax cut plans during the annual “Condition of the State” address to legislators and the governor said it was clearly a surprise to some lawmakers last night.

“I loved the gasp that I heard when I said a 4% flat tax…It was noticeable…They didn’t know. We worked on it right up to the end and I wanted to be the first to present it at the Condition of the State,” Reynolds said, “so I was thrilled.”

The governor’s fellow Republicans occupy 92 of the 150 seats in the legislature. While GOP leaders haven’t guaranteed passage of the governor’s flat tax proposal as is, they’ve made it clear the plan is the basis for their tax policy debate this year. Democrats say a flat tax is unfair and would provide a big tax break to wealthy Iowans while forcing some low income Iowans to pay more.