You are here: Home / Weather / Whopper snowstorm headed our way, 7-11 inches in forecast 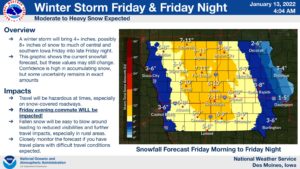 A massive winter storm system will blow into Iowa on Friday which forecasters say may drop nearly a foot of snow on a wide region of the state.

Senior meteorologist Rod Donavon, at the National Weather Service office in Johnston, says it’s likely all 99 counties will get at least -some- snowfall, but northern and central Iowa may be in for the worst of it.

“Our current forecast right now is in that six-to-ten, seven-to-11 inch range,” Donavon says, “and that’s generally a good portion of our forecast area which includes from Estherville to Mason City and southward, through the Des Moines metro right now looks to be the target area.”

While northern and central Iowa may bear the brunt of the approaching storm, eastern and western Iowa may get three to six inches, with less in the far northeast. It’ll likely snow most of the day, so if you have somewhere to go on Friday, Donavon suggests the going will get tougher as the day wears on, while the Friday evening commute could be a mess.

“We are having snow moving into the area from northern Iowa towards the south, getting into the Des Moines metro by mid-morning and by the southern Missouri border by around noon,” Donavon says. “The heaviest accumulations right now are looking like during the afternoon into the early evening hours. We could have some accumulations approaching one inch per hour at times.”

As far as winter storms go, he reminds, it could always be a lot worse.

The fortunate part is, at least the precipitation type is going to be mainly snow with this and no ice,” Donavon says. “It’s going to be generally lighter winds with it, initially. We are going to have some increasing northeast winds later in the event. It’s not going to be blizzard criteria by any means.”

Keep an eye on the changing forecast at weather.gov.