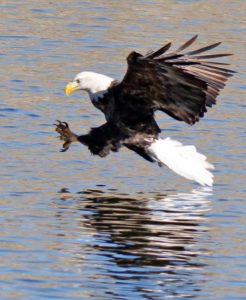 The shout of “Go Hawks!” can be heard frequently around Iowa City, but it might be more appropriate to yell, “Go Eagles!”

The Iowa Department of Natural Resources is in the midst of its annual bald eagle population survey and DNR wildlife biologist Stephanie Shepherd says they’re seeing remarkable numbers in Johnson County — in the heart of the University of Iowa campus.

“This is the Iowa River that goes through Iowa City, so around the Iowa City area both north and to the south,” Shepherd says. “Our staff counted over 700 eagles on this stretch of river and in one mile, counted over 400.”

The Mississippi River has traditionally hosted Iowa’s highest eagle numbers — both resident and wintering — but in recent years, the Iowa and Des Moines rivers have hosted even more. The new figures represent a stunning recovery when one considers eagles had nearly vanished from the landscape a matter of 50 years ago. The recovery has been gradual, but steady.

“In Iowa, in the late ’90s, we were talking about a hundred nests across the state,” Shepherd says. “Now, it’s easily up to 500 and that’s probably a conservative estimate.”

All indications point to 2022 being an exceptionally good year for eagles wintering in Iowa, though Shepherd says this may be about as large as the state’s eagle numbers will grow. 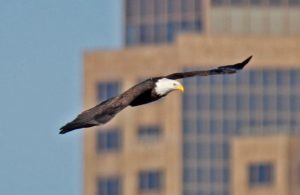 “Populations tend to grow to a certain level and then when they’ve filled in all of the appropriate habitat, they will level off a little bit,” Shepherd says. “That’s one of the things that this winter survey gives us. We are starting to see a little bit of a leveling off of the population, which is not a bad thing.”

Many Iowans enjoy spending time outside during the winter with a pair of binoculars, hoping to spot a few eagles in flight. While some of this week’s temperatures were well above normal, the recent very cold weather created a lot of ice, which shifts how the big birds hunt and gather.

“Those really cold temperatures froze up a lot of the water and that tends to concentrate eagles,” Shepherd says. “So, what you’re looking for is basically areas along any of our major rivers that have openings, below dams, or anywhere else where there’s a big chunk of open water, you’ll probably find eagles.”

During three routes of the survey, more than 1,500 eagles were reported on the lower stretch of the Des Moines River. Keokuk is holding its annual Bald Eagle Appreciation Days this coming weekend, while eagle-watching events were held in Clinton and Davenport last weekend.