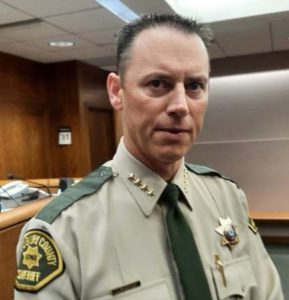 Woodbury County Sheriff, Chad Sheehan, released more information today on the fatal shooting of a man by a deputy in Sergeant Bluff Wednesday.

Sheehan says two deputies and a Sergeant Bluff police officer confronted the man as a burglary was in progress at a trailer park around 5:45 p.m.

“Deputies encountered a male suspect who immediately advanced on the deputies armed with a tire iron. The suspect attacked and struck one of our deputies with that tire iron,” according to the Sheriff. “One deputy discharged his taser. The deputy who was struck with the tire iron discharged his firearm, striking the suspect.”

Sheehan says the officers gave first aid to the man who was shot and he was taken to the hospital where he died. He says the injured deputy was treated and released and is recovering at his home.

Both deputies are on paid leave per the department’s policy while the shooting is investigated. The names of the man who was shot and killed and the deputies involved have not yet been released. The state DCI is investigating the shooting.

“Both deputies and the Sergeant Bluff police officer were wearing cameras at the time of the incident — and the incident was captured by all three body cameras,” Sheehan says. “The video will not be released until the county attorney has ruled on the use of force.”

An autopsy is planned on the dead man as part of the investigation.