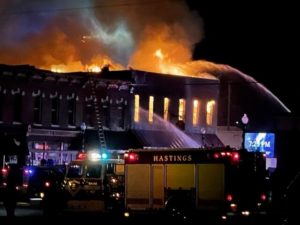 The fire at the Malvern grocery store. (KMA photo)

The owner of an iconic downtown grocery store in southwest Iowa says he will rebuild after a fire gutted Mulholland’s Grocery in Malvern just over a month ago.

Firefighters from more than two dozen communities battled the fire on December 10th. Though an investigation into the fire’s cause is still underway, Tom Mulholland says the store will return, though it may take a year.

“The insurance investigators and state fire marshal are waiting for some more information,” said Mulholland. “It’s extremely frustrating for myself and then the neighbors who have to wait through this.”

Mulholland says reconstruction won’t be able to get underway until the investigation is complete. “We can’t set any type of a timeframe,” he said. “Of course, with construction issues being the way they are thanks to COVID, I’m sure that’s going to delay things also, but that’s why we wanted to try to hit the ground running and get some ideas running, and talk to people to get ideas into the works.”

Mulholland says he’s not ready to retire and reopening the store is what’s best for the community. “Malvern needs some sort of grocery store here,” Mulholland says. “People have really realized how much it depended upon over the past few weeks, and I’ve heard so many comments. It’s going to secure the future of our community, and allow for the continued growth that Malvern has seen over the past many years.”

Mulholland adds he’s amazed by the support coming from within and far beyond the community. “I worked in Omaha for over 20 years before I bought the store,” he said. “I heard from so many customers there. I’ve heard from people from all over the country that have been customers, or came from Malvern, you know, just have some ties to my business or my community in some way. We’ve received donations from all over.”