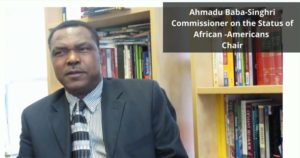 Current and former members of the Iowa Commission on the Status of African Americans are looking toward the future on this Martin Luther King, Jr. holiday.

“I see constantly the flow of people from around the country that’s migrating to the state…a lot of immigrants and refugees that are coming to Iowa,” he said during an online event organized by the commission. “I can see the whole fabric of the state changing right before my very eyes.”

Beyond diversity, Imhotep said the goal should be inclusion of all people.

“Not just some, not because of your ethnic make up or your religious affiliation, I feel that all people should be considered,” he said. “…to have a part, have a say in what needs to be done within our communities, within this state.”

Commission member Veronica Sutton of Dubuque suggested it’s time for grassroots activism. “Here in Iowa we, as people of color, have got to come together, have to come together in one accord to really tackle these problems because having other people do what’s affecting us doesn’t work,” Sutton said. “…We have to respect and determine our own destiny and that’s what keeps me going because I know it will happen, we just have to make it happen.”

Ahmadu Baba-Singhri, a sociology professor at Grand View University in Des Moines, is the chairman of the Iowa Commission on the Status of African Americans. Baba-Singhri said the future of Iowa is “more integrated” than it’s ever been, “but I can see a bright future because of the different racial and ethnic groups that are coming together.”

This was the second year the state ceremony observing Martin Luther King Day has been held online due to the pandemic. In-person events are being held around the state as well.