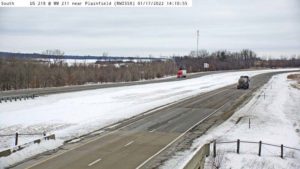 DOT camera on Highway 218 near Plainfield.

Travel on the state’s roadways is back to what you’d normally expect in January after the big weekend storm that dumped more than one foot of snow in some areas.

DOT winter operations administrator, Craig Bargfrede says clearing the snow was not easy as it started out wet and then froze. “We actually saw a lot of compaction and a lot of freezing to the pavement, so we really had to adjust our treatment practices in or to really break up that snow and ice pack on the pavement, so that we could get back down to the bare pavement,” Bargfrede says.

He says that made the job tougher in some areas. “Took us a little longer than typical — but we are back to pretty much winter seasonal conditions all across the state,” he says. The sun has been out since the storm blew through, and temperatures rose above freezing today. 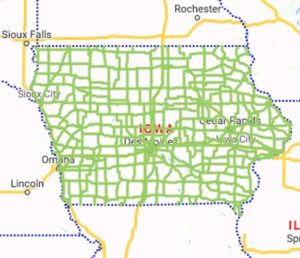 “That actually does help tremendously when we can get that sunshine and get those warmer temperatures. That helps us with the treatment that we do have out there to continue to work, and make sure that we don’t get the refreeze,” Bargfrede explains.

He says there was some drifting in parts of the state and they have been also working on clearing in those areas today. “We’ve had a number of trucks out working on some of the known trouble areas. We’ve had some blowing and drifting, we’ve had some issues with some slick ramps — just those known kind of trouble spot areas that traditionally we have problems with. We’ve been out working on those all day today,” according to Bargfrede.

There was a lot of advanced warning about the storm and Bargfrede says it appears drivers were paying attention.

“For the most part they listened to the warnings — but as the snow let up and things started to clear up a bit, then traffic started to pick up quite a bit and we did have some issues out there with traffic and whatnot,” he says. “We did have some closures during the event as well where we had some semis that jackknifed. That caused some problems. Overall, we really got through this not too bad.”

Bargfrede says it’s one of the biggest snowfalls we’ve had in a while.