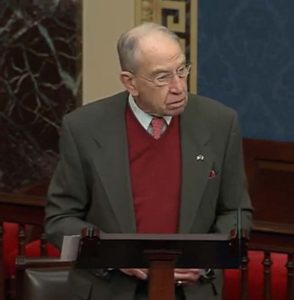 Iowa Senator Chuck Grassley spoke on the floor of the Senate Tuesday and turned arguments Democrats are making for a new federal voting law back against them. The Republican says Democrats say reform is needed after questions about the 2020 election — but says they were the first to raise the issue.

“If Democrats really wanted to preserve democratic norms, they would not be proposing the federal government overturning the current election process in all 50 states on a purely partisan basis with no attempt to even hear out Republicans’ legitimate concerns,” Grassley says.

Grassley says President Trump won in 2016 with a record turnout and President Biden won in 2020 with a record turnout — and then Republicans did well with a big turnout in off-year elections in 2021.
“Democrats accuse Republicans of wanting to keep people from voting. Why would we when we have been very successful in many large turnout elections recently?, ” Grassley asked. And Grassley says with recent polls favoring Republicans — they wouldn’t want to restrict turnout.

Grassley says it’s time to work together and stop casting doubt on elections. “Let’s start by rejecting claims that the only way the other party can win is by rigging an election. Let’s retire the short-term strategy of falsely claiming that one of the two parties is a threat to democracy. That in and of itself is a very undemocratic position to take,” according to Grassley.

Grassley says this kind of rhetoric damages civil society and erodes faith in our democracy.