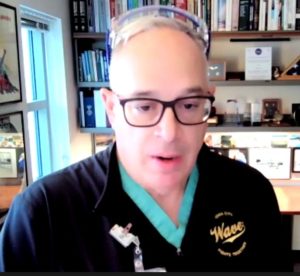 A couple of Iowa health experts say the increase in opioid deaths in the state is alarming — but they are confident things can turn around.

University of Iowa professor of psychiatry and emergency medicine, Dr. Gerard Clancy, says nearly 30 percent of their clinic and emergency room visits are now related to psychiatric and addiction needs.

“There is an evolving epidemic within the pandemic — and that’s an epidemic of both mental disorders and substance use disorders. In part, dealing with the stress of the pandemic, but in part, because the treatment system has struggled with the weight of the pandemic as well,” Clancy says.

Clancy says one of the problems is opioids are now laced with highly-potent fentanyl. “The insurgent of fentanyl has made things much more complicated,” according to Clancy. “It’s important for people to understand that fentanyl is a different player. It is more dangerous. It is harder to work with as far as some of the treatment tools that we have.”

But he says he is confident they can make progress and says mental and substance use disorders are treatable conditions, and he urges Iowans who are struggling to seek help.

Doctor Alison Lynch is the director of the opioid addiction clinic at the University of Iowa Hospitals and Clinics. She says fentanyl is a serious issue.

“It’s made it much hard to resuscitate somebody if they do have an overdose. In the past, if someone had a heroin overdose we could use Narcan — and often one dose or maybe a couple of doses would work, ” she says. “And now that fentanyl is in the drug supply — it can take multiple doses of Narcan….and even then it can be really hard to get somebody out of that overdose.”

But she says there are treatment options, and she encourages Iowans who are struggling to seek help.
“I can’t tell you how many success stories we have in our clinic. We have so many people who arrived and their substance abuse or their opioid use have become kind of chaotic and things have really gotten to a crisis point — and then they get started in treatment — and really quickly we can see a lot of progress,” she says. “They start feeling better and they are able to focus on setting some goals for themselves and really make a lot of progress pretty quickly in getting into recovery.”

The Iowa Department of Public Health estimates that fentanyl deaths rose from 31 percent of all overdoses in 2016 to 87 percent in 2021. The two spoke during an update on the opioid epidemic Thursday by Attorney General Tom Miller.