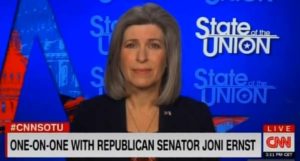 Senator Joni Ernst says now is the time for the U.S. to impose sanctions on Russia, to try to prevent an invasion of Ukraine.

Ernst is a Republican member of the Senate Armed Services Committee and, during an appearance on CNN Sunday morning, she discussed the situation in Ukraine. Ernst said without sanctions now, President Biden is appeasing Russian President Vladimir Putin as 100-thousand Russian troops sit at Ukraine’s border.

The Biden Administration just sent 90 tons of military supplies to Ukraine, part of $650 illion in defense equipment and supplies the U.S. has provided the country in the past year. Ernst said the U.S. should provide even more resources to “bolster” Ukraine’s military. CNN host Dana Bash asked if that includes sending U.S. troops to Ukraine. Ernst said “stable democracies” in Europe and around the globe make the U.S. safer, but Ernst did not say whether she believes American soldiers should be sent to defend Ukraine.