You are here: Home / News / Crowd rallies at Iowa Capitol for Convention of States 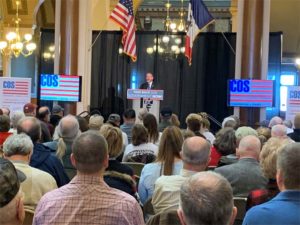 A group pushing for a Convention of the States that would propose changes to the U.S. Constitution is urging Iowa lawmakers to act.

Wisconsin’s legislature has just become the 16th state to endorse the movement. During a rally at the Iowa Capitol, former Pennsylvania Senator Rick Santorum indicated Nebraska lawmakers will do the same later this week.

“Iowa, it’s your turn. Lead!” Santorum said, drawing cheers and a standing ovation as he ended his remarks.

A handful of Republican members of the Iowa legislature spoke in favor of the plan that calls for a Convention of the States to consider term limits for congress and other federal officials as well as spending limits on the federal government. Representative Shannon Lundgren of Peosta said it’s time to contain what has become a tyrannical federal government.

“It is now or never and history has its eyes on us,” Lundgren said, to cheers. 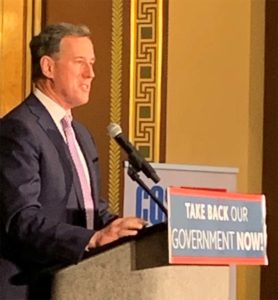 John Wills of Spirit Lake, the third-ranking Republican in the Iowa House, said Washington is worse than a swamp.

“With your help, with your assistance we’re going to change that cesspool of Washington, D.C. and we’re going to make it work again because right now it is not working,” Wills told the crowd gathered in the Capitol rotunda. “It is broken.”

Another House Republican on the rally stage denounced tyrants with a common, but profane hand gesture that drew loud cheers from the audience. Republican Jesse Green of Boone was the only member of the Iowa Senate to speak. Green criticized fellow Republicans who held power in Washington for four years and kept adding to the federal debt.

“This proves to me that really our war is not between Republicans and Democrats, but rather a war (between) Main Street and the politically connected in Washington,” Green said.

Santorum, a featured speaker at the event, hasn’t always supported the Convention of the States, but Santorum told the crowd he’s been convinced it’s a way to end hyper partisanship.

“It’s happening on both sites, with both parties,” Santorum said, to applause. “You have too many in Washington who are too comfortable with all of the power that they have and in fact like that power and aren’t really interested in giving it back to the people or to the states.”

Thirty-four states must pass resolutions calling for a Convention of the States before one would happen. Any amendments proposed to the U.S. Constitution at the gathering would then have to be ratified by 38 states. Santorum said congress has become so dysfunctional in the past decade that presidents — both Democrats and Republicans — have become like kings.

A small group protesting so-called “ag gag” laws briefly interrupted Santorum’s remarks, but the crowd at the Convention of the States rally chanted “U-S-A!” and an anti-President Biden slogan to drown them out.

Critics of the “Convention of the States” concept say it could create more chaos and dysfunction in the country as a national debate over constitutional changes would last for years and there’s no guarantee any changes would ever be made.