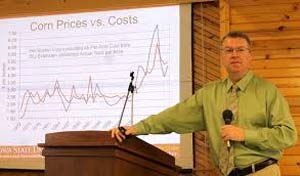 Chad Hart says farmers are seeing good prices for their commodities, mainly due to strong exports, and they should consider forward contracting, though he notes, there are signs the export trade may weaken during the year ahead.

Hart says, “The price series that we’ve got right now in front of us does lead to some opportunities, not only in marketing the corn and soybeans that are sitting in the bin right now, but also taking a look at those new crop opportunities for the 2022 crop, and even for those who are fairly aggressive, they could be looking out there to 2023 as well.”

China remains a good trading partner with the U.S., but Hart says the Chinese are beginning to cut back on their buying spree. “They’re the ones that are backing off the most as we look at these higher prices,” Hart says. “They remain a very strong market for us. As you look at our top markets, they’re still our biggest buyer on the soybean side, they’re our second biggest buyer on corn and pork.”

China’s also the third biggest buyer of beef, however, in the commodities of corn, soybeans, and pork, Hart says orders to that nation have been dropping year-over-year. Hart will appear in Le Mars tomorrow  for the ISU Extension and Outreach “Crop Advantage” seminar.