You are here: Home / Fires/Accidents/Disasters / Semi driver dies in accident that knocks out power to Merrill 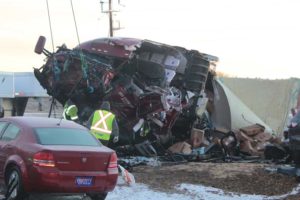 The driver of this semi died in an accident near Merrill. (KLEM photo)

A semi driver died in an accident early this morning that also left 600 people without power.

The accident happened at about 5:00 a-m when a semi truck and trailer were heading southbound on Highway 75 approaching the Plymouth County town of Merrill.

The semi initially collided with a power line utility pole, which resulted in a loss of power for Merrill residents. Then it careened into a used auto sales lot, striking several vehicles.

Plymouth County Sheriff’s Office has confirmed the driver has died. The identity of the driver is being withheld at this time pending notification of family members.