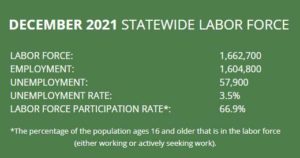 Iowa’s unemployment rate dropped for the fourth straight month in December. Iowa Workforce Development Director, Beth Townsend, says more people are getting back into the workforce.

“We are seeing a return to work for industries that had previously suffered the most if you will under the pandemic. Construction is up, manufacturing is up, people are returning to the retail and hospitality industries,” Townsend says.

The unemployment rate dropped to 3.5% in December and Townsend says they want to continue to see it drop to the levels before the pandemic. “Then we only had about 40,000 who were unemployed and we had about 60,000 open jobs. so, even then it was a problem — but today we have 85,000 open jobs and we’ve got about 57,000 unemployed,” according to Townsend. ” We really need to help employers fill all those vacant jobs if we are going to continue in our recovery.”

Townsend says some of the lost workers are those who decided it was time to retire once the pandemic hit. “In Iowa, they traditionally would work longer. Most people didn’t retire at 65, if they were in good health they would continue work for a few years. I think retirements got a little bit younger, and those who maybe had stayed in the workforce a little bit longer than they originally intended decided to retire. And that definitely had a negative impact on our workforce,” Townsend says.

She says that’s what IWD is focusing on those who aren’t yet ready to retire. “How do we get people who were either recently unemployed or who have been unemployed for a while back into the workforce. Because there are some really great opportunities for people It’s a good time to try a new occupation if you are interested. It’s a good time to be on a search for a job because employers are making big changes to encourage people or incentivize people to work for them,” she says.

IWD recently started a new unemployment system where they pair up immediately with people looking for a job. “It’s only been in effect for not quite two weeks yet — but we are seeing good responses and we are seeing people get jobs within a week or two of taking advantage of the program. So, we are just helping them make those connections,” Townsend says.

Townsend says recruiting new people into the state to fill the jobs is something they are also doing with help from the Iowa Economic Development Authority.