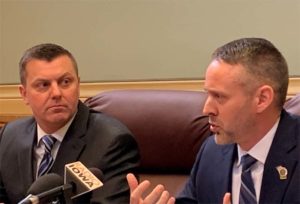 Republicans in the Iowa Senate are unveiling a five-year plan to cut taxes for individuals, corporations, retirees — including retired farmers, while making a significant sales tax shift that will provide tens of millions of dollars to water quality projects.

“…The reality is our tax system isn’t individual silos. It’s all interconnected…It’s really hard to move one lever and think that there’s not be causes and effects on the other, nor should you just move one lever and leave everything else as is. If you’re going to have a competitive code and a streamlined code, all of those have to be linked in a holistic picture, which is what our bill represents.”

The plan goes farther than the one Republican Governor Kim Reynolds proposed earlier this month, reducing the individual income tax rate to 3.6% by 2027. The Senate GOP plan also calls for two actions related to the taxes corporations pay — cutting the corporate income tax rate and reducing tax breaks primarily used by businesses by more than $140 million.

A sales tax exemption businesses have claimed when buying computers and other so-called peripheral devices like keyboards and monitors would be eliminated. Dawson said the tax break was established in the 1980s when computers were brand new.

“As we have modernized our economy, there’s really no reason this legacy exemption should still be in place,” Dawson said, adding that Iowa is the last of the 22 states with a streamlined sales tax that still have this exemption.

Senate Republicans also propose reducing the refunds corporations can claim through the research and development tax credit. The Senate GOP plan would exempt retirement income from the state income tax as Governor Reynolds and House Republicans have proposed and their bill includes the tax break Reynolds has proposed for retired farmers.

The new and surprising element of their plan deals with local option sales taxes being collected in more than a thousand cities and counties today. Dawson said the Senate Republicans’ plan takes that one percent tax collected locally, makes it a statewide tax. That means a portion of those sales taxes will now be deposited in the state fund created by voters in 2010 but never activated to finance water quality and outdoor recreation projects.

“We talked about modernizing for the 21st economy, this is the smartest way to go about our sales tax system by eliminating these 1371 individual jurisdictions and going to a unified sales tax,” Dawson said.

Dawson pointed to estimates indicating by having the state collect that one percent on sales, there will be more to distribute back to cities and counties. The plan does not change the sales taxes being collected for exclusively for school infrastructure.