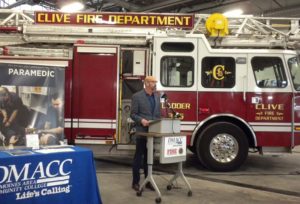 Des Moines Area Community College is starting a new program that offers a combined degree where students learn to be a firefighter and paramedic at the same time.

DMACC’s coordinator of emergency medical services, Dustin Dickhaut says it allows students to join a fire department fully prepared for duty. “Traditionally students will enter this career field having fire experience or EMS experience, and then an agency would hire them and kind of help them get the other that is missing,” Dickhaut explains. “That comes at a cost for an organization that delays their utility to the community.”

They announced the degree at the brand new fire station in the Des Moines suburb of Clive. Dickhaut says having training for both fire and EMS is the standard.

“You see firefighters you see fire stations, you think car crashes, house fires, things like that. But what you don’t oftentimes think is that there is an ambulance in that fire station too. And at any point in time the individuals who are here today they’re cross-trained. If someone from the fire engine goes homesick — the person from the ambulance jumps across and there’s not a moment’s hiccup there,” he says. “And that’s what we want to make sure we are supporting from DMACC’S perspective, is that we are giving them these individuals who from day one they could fulfill either of these roles.”

Dickhaut says the degree takes two years. He says they spend six semesters working through the prerequisites and the start of fire training — including internships in fire stations. The state already has a fire training institute — which Dickhaut says provides more advanced training.

“We actually deal with them quite regularly. In fact, they are on our advisory committee. They help inform some of the decisions we made with this degree path,” according to Dickhaut. “And I would say the training we offer is the entry-level training — the firefighter one, your EMT, some HAZMAT, your paramedic. Oftentimes individuals who do want to progress into the fire service accelerating their promotability — they would talk to the fire service training bureau.” 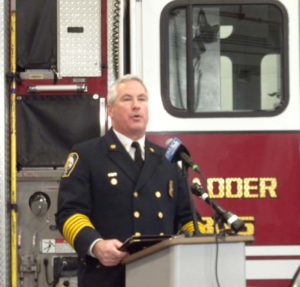 Clive Fire Chief, Rick Rowe, says there have been some good EMS training programs in the area — but the firefighting training wasn’t as easy to get. “Everybody had to do training on their own, a lot of duplication of efforts. And if you were not on a fire department, there was nowhere for you to get your firefighter training,” Rowe says.

Rowe says he used to be able to choose from more than one dozen candidates for open jobs. Now several departments are competing for four or five applicants as the need for people has increased.
“Call volumes are going up in general, as well as you get the growing communities that get to the point where they need to add a fire station. And that takes a minimum of 18 people if you are going to have both an ambulance and fire truck in the station,” according to Rowe.

DMACC says graduates with an Emergency Response degree can start at around $60,000 and that can go up to $70,000 or more with overtime. The new Emergency Response program will start for new students on the DMACC Ankeny Campus in the fall 2022 Semester, which begins on August 24th.