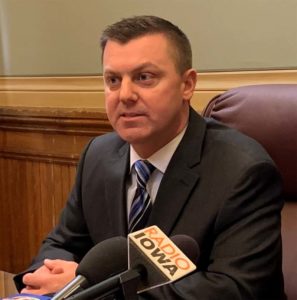 Iowa Senate Republicans have released a tax plan to lower the state income tax to 3.6% within five years.

Governor Reynolds has set a goal of lowering the rate to 4% in four years. A mechanism in the Senate GOP’s bill could eventually eliminate personal income taxes altogether.

“Really, we’re in a position where we can’t afford not to do tax cuts. This is important for the everyday Iowan,” Senate Majority Leader Jack Whitver, a Republican from Ankeny, said yesterday during a news conference. “…Their bills are going up and we’re trying to put more money in their pockets.”

The Senate GOP tax proposal includes Governor Kim Reynolds’ proposal to eliminate taxes on retirement income and provides a tax break for retired farmers. The plan cuts the corporate income tax rate along with changes to reduce tax credits and exemptions for businesses by $140 million. Whitver called it an attempt to reform how corporations are taxed.

“We want to have a real conversation in Iowa about what that rate should be and can we lower that rate if we get rid of all those special interest carve outs,” Whitver said. “Your rate shouldn’t depend on how many lobbyists you have here at the Capitol to get you those carve outs and we want to lower it for everybody.”

The plan includes a maneuver that reclassifies local option sales taxes as a statewide tax. Whitver said the move is a conservative approach that would let lawmakers put other state funds in the voter-approved by long empty account voters approved in 2010 as a way to pay for water quality and outdoor recreation projects.

House Republicans plan to release their own tax plan soon and promise it “will not raise taxes for any Iowan.”  In a written statement released late Wednesday afternoon, the Senate’s Democratic leader says the plan from Republicans in the Senate will result in higher taxes overall and cuts to state services.