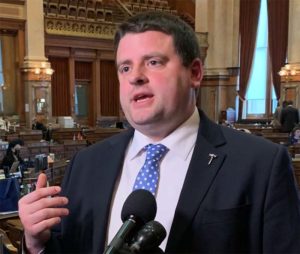 House Republicans have released a tax plan that uses the governor’s outline for lowering the state income tax to a single rate of four percent and making retirement income tax exempt.

Grassley expects the plan to be debated in the House soon, but he’s not setting a date.

“The governor’s bill that she proposed — lowering the rates to four percent, addressing the retirement — is a great place for us to get a bill that can move through the process very quickly,” Grassley said.

The House GOP plan does not include a cut in the corporate tax rate as Governor Reynolds and Republicans in the Senate have proposed. Grassley says changing state tax policy toward corporations, including a review of tax breaks, “may” be a separate conversation — later.

“I think our focus has to maintain on addressing the governor’s priority that she laid out for the legislature, which I would say is the retirement (income) and the 4% tax,” Grassley said.

The state’s Taxpayer Relief Fund has more than a billion dollars today and is expected to top $2 billion by this summer, as state tax collections soar past expectations. The governor’s tax plan keeps all that money in reserve. The House GOP plan withdraws half of it to support their tax cuts and leaves the other half in the account.

“Just to show that this has a level of sustainability and to show Iowans that we’re not just going to take that money and pull it off the table. We want to get it back in their hands and get it back into the economy,” Grassley said. “We’re thinking long term on this.”

Senate Republicans aim to reduce the state income tax rate to 3.6% by 2027 and their bill includes a mechanism that ultimately could wind the rate down to zero. Grassley said after analyzing financial date over and over, House Republicans are comfortable following the governor’s lead.

“At this point in time, I think the 4% is a very bold plan that the governor laid out,” Grassley said, “and that’s why you’re seeing the House is working off of that.”

Democrats say a flat tax will wind up causing some Iowans to pay more, while dramatically reducing the amount of income tax the wealthiest Iowans pay. House Democratic Leader Jennifer Konfrst said a flat tax is not a fair tax system.

“If we’re going to have tax cuts, they need to be focused on the middle class and middle class families,” she said.

Senate Democratic Leader Zach Wahls said Democrats are waiting for an in-depth financial analysis of the plan. “I don’t think that rushing through a 118 page bill is a good way to make policy in this state,” Wahls said. “…I don’t know what they’re trying to hide.”