You are here: Home / Fires/Accidents/Disasters / Man trapped in corn rescued near Cedar Rapids 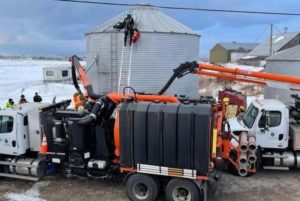 Cedar Rapids firefighters rescued a man trapped in a grain bin on the southwest side of the city Thursday.

Firefighters say they found the man up to his chest in corn after he got sucked down into the grain. Firefighters used special rescue equipment to protect the man as they removed grain.

Trucks from the Cedar Rapids Public Works Department were called in to help suck some of the grain out of the bin.

The man was freed about an hour and a half after firefighters arrived. He was alert and talking and taken to the hospital for evaluation. His name and condition have not been released.