You are here: Home / News / Weekend warmup on the way 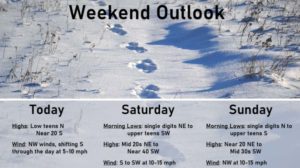 January is going to end up on a warm note. National Weather Service meteorologist Ashley Bury says the relief is coming from the south.

“We’re going to see some more southerly winds pushing some of that warmer air up into the area — so it’s going to be a nice relief to the temperatures we’ve been having on a little rollercoaster of ups and downs over the past week,” Bury says.

“It looks like we’re still going to be in the 40s for Monday, and then as we get into the beginning of February — looks like it will kind of hold into the 30s for much of the area — and then dropping down back to the teens by Wednesday,” according to Bury. She says things aren’t usually this warm.
“It’s about ten or 20 degrees about average for this time of year. The teens are bit more of what we’d expect, into February as well,” Bury says.

The warmer temps will lead to more melting — and that melt will freeze again overnight. “Refreezing is definitely possible, so it’s important to be extra cautious when you are outside for that,” Bury says. There have been times when temperatures were below zero in the last week, including some days with wind chills in the double-digits below zero.