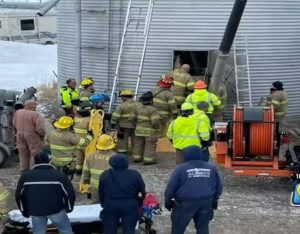 New details show a Cedar Rapids man rescued from a grain bin last week was lucky to get out — and the first fireman on the scene was working his last full day on the job.

Darrell Benish, of Cedar Rapids, was rescued by members of the Cedar Rapids and Swisher Fire departments. Benish tells KCRG TV he was trying to push the auger in with his foot, and it slipped.
“The suction sucked me in there, and in the meantime, nobody saw what was happening,” Benish explains.

Benish was stuck for about two hours with freezing grain covering his body up to his shoulders. Firefighters attempted to insert a barrier to keep more corn from completely covering him. He says he couldn’t breathe. “Because even when they took the corn out — it was still kind of rolling down all the time. It was probably the most pain I’ve ever had in my life,” Benish says.

Cedar Rapids fire captain Brian Hall was the first on the scene, and tells KCRG TV they were lucky.
“To have a situation like this where we can make a rescue and the person survives, very rare,” Hall says. First responders cut four holes in the side of the bin to release as much corn as possible.

Hall says Benish’s position in the bin was a factor in the corn trapping him. “He was probably six feet inside the door,” Hall says, “which also I think accounted for some of the crushing factors. He was not in the center and everything coming at him from all directions.”

It was Hall’s first-grain bin rescue in his 33-year career — and also his last full shift — before he retired Sunday. He says the rescue made him think about his work in those years.  “Kind of reflected back to a lot of those type of scenarios where we’ve truly made a difference in people’s lives,” Hall says. “Not just in his life, but his family’s lives and all of us.”