The season for one of the most unusual fish in Iowa waters opens Tuesday on the Missouri and Big Sioux rivers.

The DNR’s Chris Larson says the paddlefish season was reinstated in 2014. “It started off with a bang when we first opened it up and then it has kind of settled down to about 300 licenses sold per year,” he says. “The folks who are getting our from the survey results we get back –they are about 25 to 35 percent successful depending on the year.”

Paddlefish have a long snout which gives them their unusual appearance. “They almost look like they belong in the ocean with that big snout sticking out there. There’s really no other freshwater species in the United States that looks like that. They’ve been around for hundreds of thousands, if not millions of years,” Larson says.

Larson is the Western Iowa and Missouri River Regional Fisheries Supervisor and says the weather could impact the start of the season. “I think the biggest thing is ice floes. when it gets really cold like this, there are some pretty big chunks of ice that come floating down the river. And obviously, you are not going to want to be out in a John boat or any kind of boat when those big chunks of ice come floating through,” Larson says.

Paddlefish feed on plankton, so you have to catch them by snagging them on the bottom of the river.
“Behind the wing dikes, that rock structure that sticks our to deflect the river away from the bank, right behind those you’ll find anywhere from 30 to 500 feet deep holes — and in the wintertime, that’s where those fish are hanging out,” he explains. 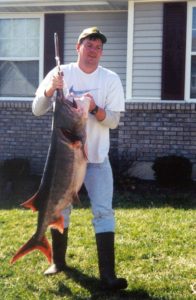 He says there is a size limit — and any paddlefish between 35 and 45 inches have to be released to protect the brood females to keep the population in the river. The paddlefish season was started back up after studies showed their populations were doing well, and Larson says the signs continue to be good.
“Fron everything we’ve seen they’re a pretty stable population,” according to Larson. “They travel from Gavins Point Dam dam all the way down –we’ve had a number of our Iowa tagged fish captured down in the Tennessee part of the Mississippi River. They travel hundreds and hundreds of miles and fish that they tag we find up here and fish we tag they find down there. So, they are a pretty mobile population.”

He says if you do catch a paddlefish with numbered band tag in the lower jaw you should call the phone number on the tag and report the tag number, date of capture, capture location, and eye-to-fork length.
For more information about Iowa’s special paddlefish season regulations, visit the DNR website at www.iowadnr.gov/paddlefish.