You are here: Home / News / January colder than normal with some above normal snowfall 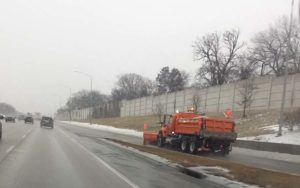 DOT plow on the Interstate in Des Moines. (RI photo)

January saw colder than normal temperatures statewide and parts of the state had above average snowfall.

January was drier than normal if you average it out statewide. “We were about a quarter-inch below average, but January is the driest month of the year and it doesn’t take a lot to be above or below average,” according to Glisan. “And then if we look at the actual snowpack that we’ve had — about eight and a half inches across the state. And that was basically above average across much of southeast and central Iowa. And that’s about an inch above average.”

With groundhog day coming up — many are wondering what is ahead for the rest of winter. Glisan says the early indications show February not being as cold as the month was one year ago. “Now we see in the short term getting out into the middle of February — near normal to slightly elevated shots of warmer conditions,” he says.

Glisan says that could mean not as much precipitation. “This time of year when we do see warmer conditions we generally see a drier signal or near-normal conditions — but we are seeing an elevated signal for drier conditions for the first half of the month,” Glisan says. “If we look at the monthly outlooks in general that were issued on January 31st — we are not seeing any real clear guidance for the full month.”

Glisan joked that without a clear signal we’ll have to wait to see what Puxatawny Phil says will happen.