You are here: Home / News / Nomination deadline approaching for Heroes of the Heartland 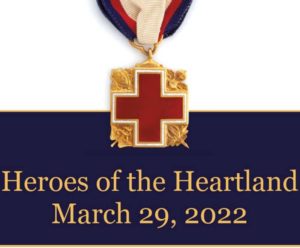 Iowans have until week’s end to nominate an unsung hero they know for statewide recognition.

The Iowa chapter of the American Red Cross is asking to hear stories about people in our bigger cities and rural areas who’ve helped save or change lives for the better. Agency spokeswoman Emily Holley says the Heroes of the Heartland program honors ordinary people for doing extraordinary things.

Now in its 21st year, Holley says Heroes of the Heartland honors Iowans who have made a difference in the lives of others. “Last year, we honored — there were three friends who were playing soccer and one of them collapsed and had a heart attack,” Holley says. “His two friends saved his life using CPR and an AED, which is remarkable.”

Other past recipients include a pastor who collects and delivers food to the homeless, a neighbor who woke up a family when he saw their house was on fire, and a military officer who runs a suicide prevention service for current servicemen and women.

“It’s one of our favorite events because it really does shed light on people who are unsung heroes,” Holley says, “and they haven’t gotten the recognition that they deserve.” The deadline to make a nomination is Friday at the website below. A recognition event is scheduled for March 29th in Des Moines.