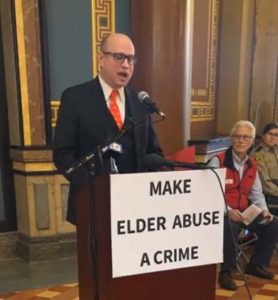 Groups advocating for older Iowans are calling on lawmakers to strengthen the state’s laws on elder abuse.

The Iowa Department of Human Services says the number of reports of dependent adult abuse increased 37 percent from the first half of 2020 to the second half of 2021 with 5,800 cases. Iowa AARP spokesman Anthony Carroll says around half of those reports are rejected by DHS, which does not keep statistics on elder abuse.

“Now to be clear, the rejection by DHS of the majority of those cases, is not an indictment of DHS  or an indication it’s not doing its job. It’s an indictment on the gap of our state laws, Carroll says.  During an event at the state capitol, Carroll says the law needs to be updated to get rid of those gaps.

“The alleged victim is a dependent adult, a narrow definition that starts with someone aged 18 and plus. And the second part the alleged perpetrator has to be the narrow legal definition of a caretaker,” he says.
A bill that passed the Senate last session would set certain penalties and mandatory minimums for the abuse of a person age 60 or older. AARP state president Chuck Betts of Keokuk says the group is lobbying House members to follow what the Iowa Senate did.
“Getting legislation across the finish line during this session is a top priority for AARP Iowa,” Betts said. “We care deeply about this issue and we won’t let off the gas until everything is settled and we get this pushed through.”
AARP says elder abuse is an often-hidden occurrence that affects far too many older Iowans. And says the abuse takes many forms, often found together: physical, sexual, emotional, neglect, and financial exploitation – the most prevalent form of elder abuse. This bill is supported by Iowa law enforcement groups, financial institutions, aging advocates, faith groups, and many others.
(By Natalie Krebs, Iowa Public Radio/O.Kay Henderson, Radio Iowa)