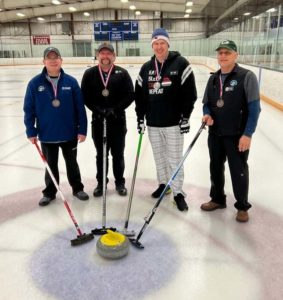 The opening ceremonies of the Winter Olympics in Beijing are Friday night, but the international competition is already underway in some sports — like curling.

Emily Nelson, with the Cedar Rapids Curling Club, says people who see the sport on TV and are curious should visit the rink and sign up for one of the upcoming “Learn to Curl” training sessions.

“We have a bunch of one-night events, they’re an hour-and-a-half. You’re going to get to come in and really learn the basics, give it a try and we’ll end with playing a very short game,” Nelson says. “Then we have a kind of introductory league or a mini-camp, and they run for three to four weeks.”

It’s said the sport of curling began on frozen lochs and marshes in Scotland during the early 1500s. The modern version still involves sliding large stones across the ice toward targets, and while it may look easy, Nelson assures there’s an abundance of skill and fitness involved.

“When you’re seeing those Olympic curlers, there’s a lot of physical activity and they are in shape,” Nelson says, laughing. “I know a lot of people joke that maybe it doesn’t look like it, but there’s a lot of work going on on that ice. Sweeping can burn a lot of calories.”

The Cedar Rapids-based club had more than 80 members before COVID and is now looking to rebuild its ranks. Nelson says current members hail from all over eastern Iowa, from Cedar Falls to Washington.

“Curling is a lifelong sport. We’ve had members as young as 11 all the way up into their 70s, so it really runs the gamut on who curlers are,” Nelson says. “It’s a growing sport in Iowa. It’s huge in Wisconsin and Minnesota and Illinois. I think it’s really ripe for Iowans to discover this sport.”

Events are planned throughout February and into March so you can learn the rules, techniques and etiquette needed to curl — and then put your new skills to the test. Learn more at:
https://cedarrapidscurling.com/