You are here: Home / News / Governor says Iowa’s corporate tax rate an outlier that needs to be cut 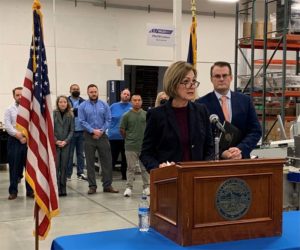 “When we talk about the corporate tax rate, we are tied for third highest in the nation — 9.8% is our tax rate,” Reynolds said late this morning. “Illinois, California, New York are lower than Iowa.”

Reynolds did not mention cutting income taxes for corporations when she unveiled her tax plan during her Condition of the State Address in January. During a news conference today, however, Reynolds described Iowa’s corporate tax rate as a liability compared to the zero rate in South Dakota and Nebraska’s corporate income tax of  7.5%

“I’m trying to get to 5.5 flat,” Reynolds said. “There are 11 states today — today! — that have a corporate tax rate under 5%, so that’s what I’m saying. Every state is very competitive because they know that’s what you need to do to be in the game and to compete. We are an outlier.”

House Republicans have released a bill that includes most of the governor’s tax proposals, with the exception of a corporate income tax cut. Senate Republicans have a plan that does cut the corporate tax, but not as deeply as Reynolds proposes. The Senate GOP plan also reduces or eliminates some popular business tax credits and exemptions. Reynolds told reporters her goal is to keep the corporate tax rate simple, but she’s not saying what concessions she might ask for or make.

“This is not a discussion I’m going to have with the media,” Reynolds said. “We’re going to sit down and talk to legislators and we’re going to take a look at what it looks like, where we agree, maybe where we need to change.”

Reynolds made her comments during a news conference at a business in Des Moines to tout another element of her tax plan that is included in both plans released last week by House and Senate Republicans.