You are here: Home / News / Governor’s bill cuts duration of unemployment benefits to max of 16 weeks 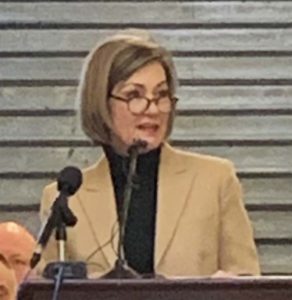 The governor’s bill that would reduce the maximum time Iowans can receive unemployment benefits from 26 weeks to 16 has cleared its first hurdle in the Iowa House.

People getting unemployment checks would have to accept a lower-paying job more quickly or lose their benefits if the bill becomes law.

J.D. Davis, a lobbyist for the Iowa Association of Business and Industry, said the focus is on re-employment.

“Unemployment benefits are something that takes a person from work to work,” Davis said during a House subcommittee hearing. “…Getting people back to work sooner that are in the workforce already is a goal worth pursuing.”

Molly Severn, the governor’s legislative liaison, said the bill is a priority for Reynolds.

“Our state cannot afford to have employable Iowans on the sidelines of our economy for an extended amount of time,” Severn said.

Labor unions oppose the bill. Felicia Hinton, the North Central States Regional Council of Carpenters, said it’s “offensive” for Governor Reynolds to suggest in her Condition of the State address that “the safety net has become a hammock” and propose a 40% reduction in unemployment benefits.

“In no way is this a hammock that people are laying back, barely getting any of the money that they were making on a weekly basis,” Hinton said.

The bill also calls for delaying payment of the first week of unemployment benefits. Mike Gronstal, a lobbyist for the Iowa State Building and Construction Trades Union, called that’s “a serious attack” on the industry.

“The vast majority of building trade workers are laid off once a year,” Gronstal said. “This bill reaches into the pockets of tens of thousands of Iowans and takes $300-$400 out of their pockets.”

Two issues unrelated to unemployment are attached to the bill, and would provide additional liability protection to doctors and trucking companies.