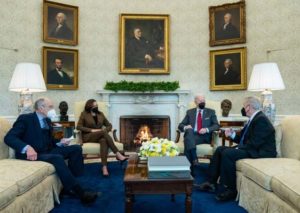 “What’s going to be an issue for me is, you know, what we call temperament, leaving their own views out of the decision making,” Grassley said during an interview with Radio Iowa. “That means basically that they’re going to look at the law and interpret the law the way Congress wrote it.”

Grassley, the top Republican on the Senate Judiciary Committee. He and the committee’s chairman met with President Biden at the White House yesterday to discuss the process of filling the court vacancy this summer. Grassley said Biden’s potential nominees appear to have credentials that are common among the current justices.

“On the list, obviously, are African Americans,” Grassley said, “but they also come from prestigious universities, law schools and that doesn’t automatically make them a justice on the Supreme Court, but that seems to be the tendency of the people we have on the Supreme Court.”

“You can be just as qualified to be on the Supreme Court whether you’re black, brown, Asian, Native American, man or woman, anything else,” Grassley said. “You’re looking at what they do.”

A few Republican senators have raised objections to Biden’s pledge to nominate a black woman, comparing it to affirmative action and saying it adds to the perception the court is a political institution.

Grassley briefly talked with Biden yesterday about the lack of competition in the cattle industry and promoted a bill he’s worked on with a bipartisan group of 16 senators.

“You get invited to the White House the first time under this administration and I’ve heard him speak about how he wants to increase competition in the marketplace,” Grassley said, adding Biden recalled conversations they’d had 25 years ago when both were Senators, working on a bill to address anti-competitive practices in the construction industry.