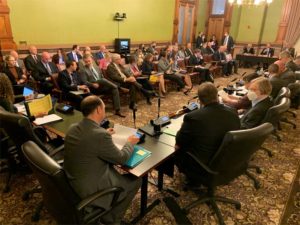 The Senate GOP’s five-year plan to cut the state income tax rate to 3.6% cleared the Senate Ways and Means Committee today on a party-line vote.

“I feel that this bill goes well beyond just tax cuts,” Dawson said. “It actually modifies and modernizes our system for an economy of the future, the 21st century.”

According to Senator Pam Jochum, a Democrat from Dubuque, the initial analysis shows the tax cut will amount to no more than 28 cents a week for the more than 560,000 Iowans who’re at the bottom of the income ladder.

“I’m not opposed to tax cuts,” Jochum said. “I just want to make sure they’re very targeted to those who need it the most.”

The bill is now eligible for debate in the full, 50-member Senate.