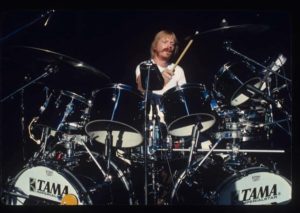 Shenandoah residents are mourning the passing of another local music legend. William Robert “Wil” Leacox died this week at his home in Stockton, California at the age of 74.

Leacox was the drummer for the group America for 41 years. A 1965 Shenandoah High School graduate, Leacox honed his music skills playing for many local music groups.

Leacox spoke with KMA Radio about his background in a 2012 interview when America was recognized on the Hollywood Walk of Fame. Leacox says he was influenced by family as his dad, his uncle and an older cousin all played the drums.

“So I kind of started learning from them — and then I went through the school system in Shenandoah with Doc Creighton, who was an amazing guy. By that time, I had been playing in–oh, I can’t even count–probably 10 different bands through high school. Then, of course, I went to Washburn to music college, and that was that,” he says. “It was a good place to learn to play in Shenandoah. It’s a very musical town–that may have had some influence.”

Three years after graduating from Washburn University, Leacox got a break and replaced David Atwood as America’s drummer in 1973.

“After college, I found my way to the west coast,” Leacox said, “and started freelancing around L.A., and playing the club circuit, and a bunch of recording sessions during the day–and sometimes, at night, as well. I met an actor, and played drums on his recording. He knew that America was looking for a drummer, so I set up and audition, and got lucky, and got the gig.”

Leacox remained with the group until his retirement in 2014. He was asked whether there was any secret to the band’s longevity. “I’m not sure that we know,” Leacox said. “But, we love what we do. We’re like a family, so we’re just going to keep on until we can’t.”

Leacox was inducted into Iowa Rock and Roll Hall of Fame in 2006, and was added to Shenandoah’s Iowa Walk of Fame three years later. Hackett Livingston Funeral Home released a statement Wednesday indicating Leacox will be missed by his brother Jim Leacox, sister Janie Casteel, their spouses, plus his nieces and nephews, as well as his California friends and “his many friends and fans around the world.”

Memorial services are pending at the Hackett Livingston Funeral Homes. Memorials can be sent to the Leacox Family Music Education Scholarship in care of the Washburn University Alumni Association and Foundation, and the Greater Shenandoah Historical Society.